Outdoorboarding.com is reader-supported. If you buy an item through the links on this site, I may earn a small commission at no extra cost to you. Learn more. 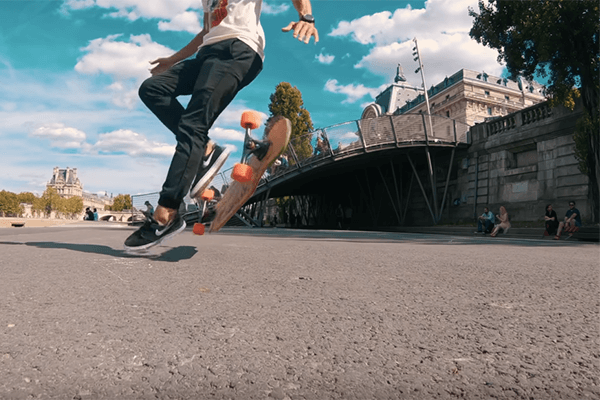 You might have heard of this famous saying, “Go where you feel most alive.”

Ever wondered how would it feel like leaving your comfort zone and doing something that is not so mainstream yet can give you the liveliest moments?

Among many other activities, riding a longboard and not just riding but doing amazing tricks could be an activity giving your adrenaline a rush.

If you are a longboard user and are keen to learn different tricks and techniques then hold on, you have hit the right place.

In this article, you guys would have the pleasure to know everything that you have been interested in getting knowledge of, for you love doing all the crazy stuff with your longboard.

You might be using your longboard for freeriding where you perform downhill riding at a moderate level performing stunts but keeping in mind the speed at which you perform.

But when it comes to freestyle riding, you have to be more expert to some extent since it involves some technical acrobatic stunts. Here the rider has to give his board some constant overturns and do some extra spinning tricks.

Now you might be wondering what is the difference between skateboarding and longboarding. So long story short, the longboard has got some cool touches to it which the skateboard lacks.

If you are interested in doing freestyle riding, you always have to keep in mind its requirement, since this stunt would never work unless you are in a proper format. For instance, your body should be flexible enough to maintain any of the body postures.

Moreover, since this freestyle riding needs you to perform some solid skills (like how you control your body while you flip and then turn over the longboard), so you might have gotten the idea of how this works.

At first, these stunts would sound like some alien stuff, but you will get along with them quite well once you master the art of how to regain your balance while you jump on and off the longboard flipping it over.

Have you ever wondered, why do always young athletic people are free to style riders and why not someone who has just crossed a decent figure when it comes to age? Well! There is a logic behind it.

In freestyle riding, there are some moves that can give your bones and joints a very tough time as all the exerting pressure falls upon them and most obviously causes twisted elbows and joints.

In the early years, the ligament strength and joint mobility are very remarkable. Whereas, in older age, the joints become weaker and anything as pressurizing as these stunts could result in permanent damage to the movable joints.

Wait! Didn’t it become so depressing? This thought that you just celebrated your 50th birthday a few days back and didn’t feel like doing all the floor boarding since you think that your joints won’t be allowing you.

Well, I have got something to cheer you up. Your age doesn’t matter if you stay fit and healthy. Exercise regularly and make your bones a constant of all the right exercises.

So what are you waiting for? Get your schedule right and start exercising and go where you feel the most alive.

So these hard and fast rules of freestyle longboarding might have blurred your idea of experiencing the stunts. But wait! There are some techniques which will make your dream true, and you too can become a stunt-performer so to speak.

I guess, there could be no better beginning step than this one. You do know how to stand on your longboard. Don’t you?

The next thing you ought to learn is how to balance yourself and maintain a body posture.

In the nose manual, you have to be at your front foot on the nose of the longboard while the rear wheels are off the ground.

This could be done while the front foot is shifted towards the nose of the longboard and leaving the rear foot behind. Gradually, the back foot is moved to the center, and now the whole weight of the body is on the front foot.

While shifting your weight, always consider how much capacity there is. Don’t burden the front so that it topples down.

This is one of the easiest tricks and can be very easily learned by beginners.

At this point, your front foot which you had already moved towards the nose of the longboard becomes the pivot, and your body starts rotating around it. Meanwhile, you bring your rear foot to the front as well.

Here the longboard has to be flipped 180 degrees, parallel to the ground and this trick is one step further from the pivot. Though the longboard spins, the position of the rider remains the same.

Initially, you have to do the pivot step for moving your front foot towards the nose of the longboard while you spin it with the help of your rear foot swinging about.

You slightly jump up while flipping your body meanwhile. The instance; if the longboard completes its rotation of 180 degrees, you end up on the board. As I just discussed above that the position of the rider does not change in this step.

The reason is that while the longboard was rotating, you too flip around while having that slight jump.

To master this step, you are going to have a lot of practice but believe me; it’s going to be worth it.

This three step longboarding is not the first step to conquer; rather there are some other things to longboarding which are even more fascinating. Longboard dance is one of them.

You love dancing. But have you ever thought of amalgamation of your dancing hobby with longboarding? Doesn’t this make your adrenaline rush? I bet it does.

Dancing on a longboard is though, a difficult step but it’s not impossible. This dance will not be just fun only; instead, it will make you take control of the longboard in the best possible way.

Moreover, the freestyle riding and downhill ride too would be a piece of cake to you after you are experienced enough to carry out the longboard dancing.

Just like the freestyle riding, for dancing too, you need to have strengthened joints and bones as you will never want to go numb and face strains after the dance. For this, you will need to have a fit physique that can withstand the pressure of different stunts.

Longboard dancing isn’t about overnight practice; instead, it’s a long-term practice combined with some tricks that end up giving the best results.

Let’s have a look into some of the dancing techniques:

This is the most basic trick that opens up all the other methods to you.

Here in this technique, first of all, your back foot should be on the bolts of the longboard while the front foot is towards the center. Now shift all your weight on your front foot while it touches your rear foot at some angle ranging between 45-60 degrees.

The process is repeated from the start.

Peter-pan step is almost similar to the cross-step. But it will take more time to learn and will add some fascinating aspects to your dance.

In this step, move your front foot straightforwardly. After this, glide it back to the middle of the board and then eventually towards the edge.

It’s about time; you move your rear foot alongside the front foot. Place it parallel to the front foot on the other side of the longboard. This is the position where your legs should cross each other.

While keeping your feet crossed to each other also try to keep the souls of your feet parallel to the movement. Repeat the trick but make sure your feet cross each other in turn but never exceed the middle. Your feet will take turns and return to the original stance once they reach the center.

This is the most stunning technique to make your longboard dance even more fascinating. Here, your body will be the axis around which there will be a half spin of your body while you will move forward as well.

Just like in freestyle riding, the manual techniques help in a successful ride, in the same way, these manuals can help you out in conducting the best dance practice.

Firstly, move your rear foot towards the back of the longboard. Shift all the weight on the back foot than on the front one. The moment you remove the weight from the front, the front wheels will start lifting.

Adjust your body in the middle by maintaining your weight forwards and backward.

The ideal spot will take some time. Be patient.

Got the techniques, start practicing as practice makes a man perfect.

Most of the time, longboard riders ignore the usage of protective gear because they get over-confident about their experience and stunt professionalism. If you are among those who ignore wearing protective gear, be aware you too can be vulnerable to injuries.

Here are some of the important safety gears that are to be used to avoid any inconvenience.

The first and most important safety gear is the helmet which should never be ignored. Most of the riders fall on their head while longboarding and thus causing severe head injuries. So, it is advised that during a freeriding as it is always a downhill race, helmets should ever be worn.

Padded Shots To Help The Feet Have A Free Grip:

Wrist Guard To Protect The Wrists From Excessive Pressure:

Wrist guards might seem like very small safety gear to be used. But while longboarding and taking different turns, all the pressure lands on the wrist. So to avoid any damage to the wrists, it’s better to have a wrist guard to protect the wrists from excessive pressure.

Upper Body Armor To Safeguard The Upper Body From Any Injury

If a rider loses his control while being on a longboard, he always falls covering a considerable distance on the surface he was longboarding on. This causes severe bruises and peeling off the skin.

To avoid such unpleasant situations, there are specially designed armors made of fiber. These costumes help to protect the upper body from injuries when a rider falls from the longboard due to his lost grip.

So these protective gears, no matter how trivial they might sound, do play a very important role in smoothing the journey of the longboarding. If properly used, they could help us in unimaginable ways.

After going through the techniques and tips, you would have gotten a perfect idea of longboarding. While longboarding may sound like the most challenging task, it could be mastered through perseverance and hard work.

The techniques at this moment given should be practiced to excel in art. And don’t forget the protective gears.